In this Placer Bytes we dive into the rebounds of Five Below and Macy’s and try to reinforce the bull case for the office supplies sector.

Five Below is a brand that was hit hard by the pandemic. Visits surged in February, growing by 16.8% year over year, before taking a 45.9% drop in March and falling completely flat in April. Yet, the rebound is underway. Visits rose week over week by 13.6% the week of May 11th, 15.6% the week of the 18th, and 9.8% the week of the 25th. And this rapid move to more normal levels does not appear to be abating. Visits on June 3rd were down just 22.9% year over year for the equivalent day, the best performing day for in-store visits since mid-March.

Another brand that felt this same pattern was Macy’s. Following a small year-over-year dip in January and a rise in February, Macy’s visits were expectedly hit hard by the pandemic. But since beginning its reopening process, visits are indeed rising. The week of May 11th saw week-over-week growth of 3.9%, while the weeks of May 18th and 25th saw increases of 13.3% and 5.7% respectively.

While the growth is still limited by restrictions being put in place by malls, there are positive signs for the brand including the potential benefits of a key competitor, JCPenney, closing a large number of stores. Additionally, like Five Below, early June has shown the chain’s strongest visit numbers yet. So, though visits are not likely to reach normalcy in the very short term, the potential for a rebound is clearly there.

In late April, we took a look at Office Depot and Staples and noted that both brands were performing at surprising levels considering they had been facing some significant visit declines in recent years. And while the pandemic didn’t drive an immediate and dramatic turnaround, it did bring heightened awareness to the value of the home office. Early in the crisis, visits to both brands were far better than they had in the previous months. And so we presumed that the office supply sector could be among those that look at the pandemic as a critical turning point, reemphasizing their value. Critically, it is important to note that this kind of bold prediction is only interesting because there is a high likelihood it could be wrong.

And looking at data through the end of May has done nothing to dissuade proponents (namely just me at this point) that this particular bold prediction won’t come to fruition at least to a certain extent. Looking at monthly data for both brands shows that February visits indeed saw a much smaller decline than those in January or late 2019. Then early March saw weekend visits spike, though the closing of stores limited the overall uplift before visits plummeted in April. Yet, May is seeing a significant rebound. 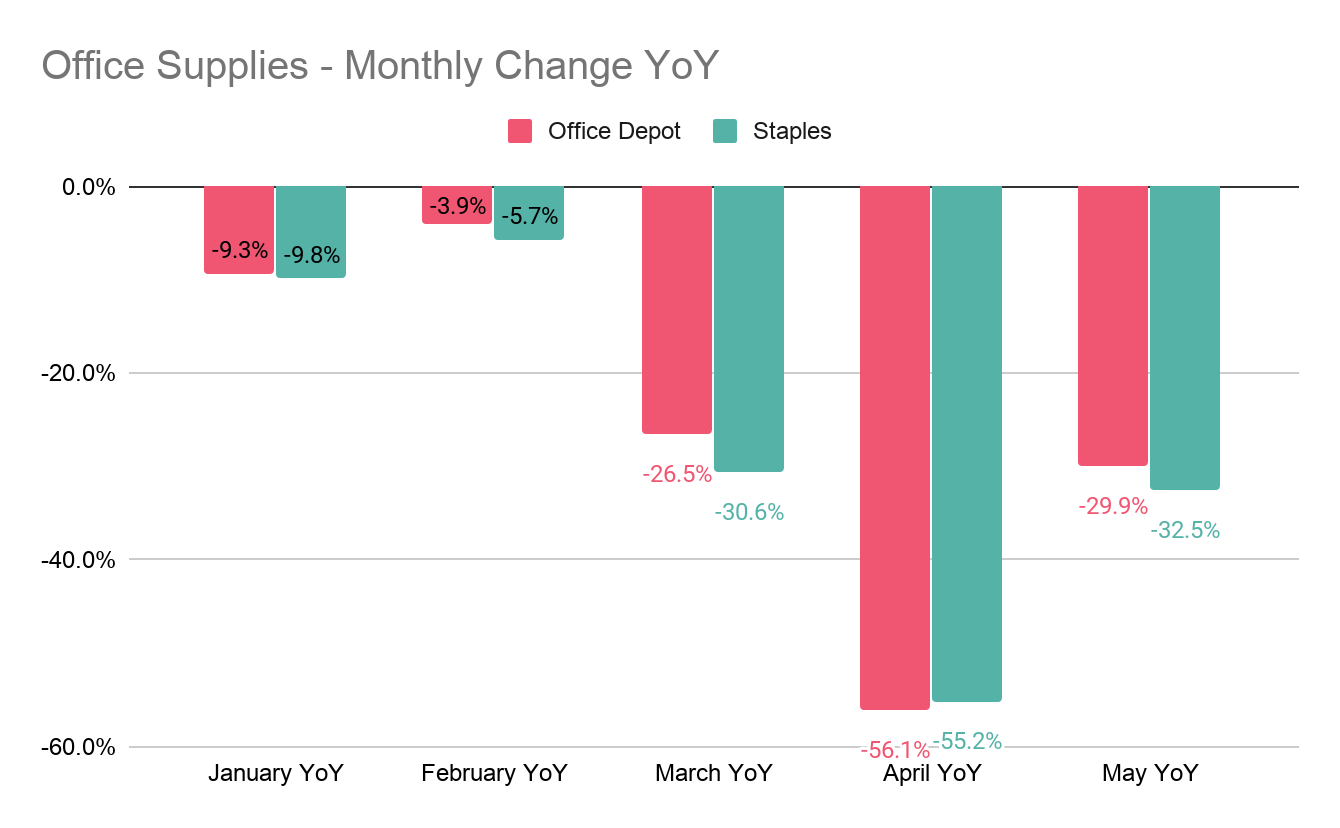 This rapid case of recovery is very promising, but its continued move will rest heavily on whether the upgraded status of the home office remains. Should work from home become just a slightly more significant component of the lives of many Americans, the boost could sustain itself. However, it will rely on the ability of these brands to effectively capitalize on this momentum.

Can Office Depot and Staples ride this wave forward? Will Five Below and Macy’s maximize the recovery? Visit Placer.ai to find out.